Heaven Sent Services is a 501 (c)(3) Non-Profit Organization that finds and fills the needs of homeless and underserved individuals in Las Vegas, Nevada, including ex-felons and D.H.S. recipients.

There is an underworld beneath the electricity of the Las Vegas Strip. Hidden homeless live in underground flood tunnels, parks, abandoned buildings and foreclosed homes mostly out of the public eye. There are about 10,000 homeless people living in the Las Vegas Valley. They are referred to as "Lost Vegas".

Heaven Sent Services Founder and Staff are committed to providing aid to this underserved segment of Las Vegas. 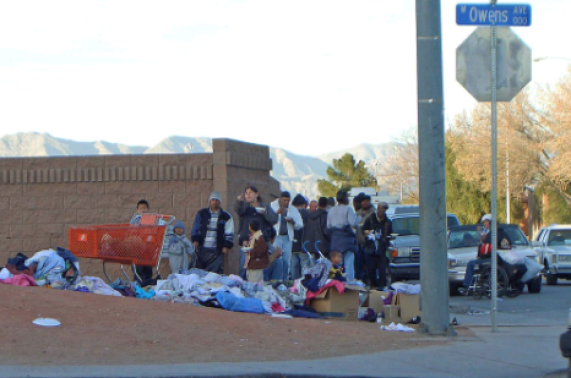 Las Vegas has the fourth highest rate of homelessness in the U.S. Las Vegas, with 50 homeless individuals per 10,000 people last year ranked only behind Tampa, Fla, New Orleans and Fresno Ca, according to a study released by the National Alliance to End Homelessness and its Homeless Research Institute in Washington D.C. That is two-and-a-half times worse than the national average of 21 homeless individuals per capita.

• 55.4 percent of homeless individuals surveyed in the 2016 Homeless Census reported they were experiencing homelessness for the first time.

• 84.7 percent of the homeless people surveyed reported they were unemployed.

• Nearly 12 percent of the homeless population is estimated to be over the age of 61.

• On any given night, there are more than 800 victims of domestic violence who are homeless in Southern Nevada.

• 70.8 percent of the homeless population experiences one or more disabling conditions.

On any given night, approximately 1,530 unaccompanied youth, including 280 unaccompanied children under 18 and 1,250 unaccompanied youth ages 18-24, are homeless in Southern Nevada. This is about 25 percent of the approximately 6,200 people who are homeless in Southern Nevada on any given night, according to the 2020 Southern Nevada Homeless Census. Unaccompanied homeless youth may be staying in a shelter program, living on the street, or squatting in an abandoned building. In addition, more than 13,000 children and youth are in households that are unstably housed, such as multiple families sharing a single-family residence, or families staying in weekly hotels. The leading causes for homelessness among youth include being kicked out of the house, emotional abuse, and financial issues at home.